I had eaten soooo much squash and zucchini a year ago, when that was about all I could eat, that I took quite a hiatus from them and just recently began to add them to the grocery list once again.
And they really are good. Especially made in a ratatouille fashion.
Ratatouille sounds fancy, and I'm sure there are some out there more award-winning than mine, but all you need is: Zucchini, Tomato, Onion, Garlic, Basil (and I use Yellow Squash in place of the more traditional Eggplant). 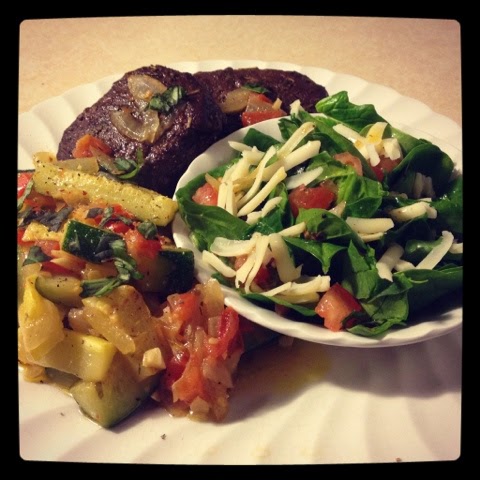 This is a batch I made a couple weeks ago. First time I had used fresh Basil in with it. WOW! Makes all the difference in the world. So fresh and yummy!
For this batch, I just chopped the veggies up, tossed in some olive oil in a hot pan and tossed in some Basil at the end. (I also throw into the pan each according to how long it takes to cook - Start with the onions, then squash and zucchini, saving the tomatoes for the end, since you're really just trying to heat them up, not cook them down.) 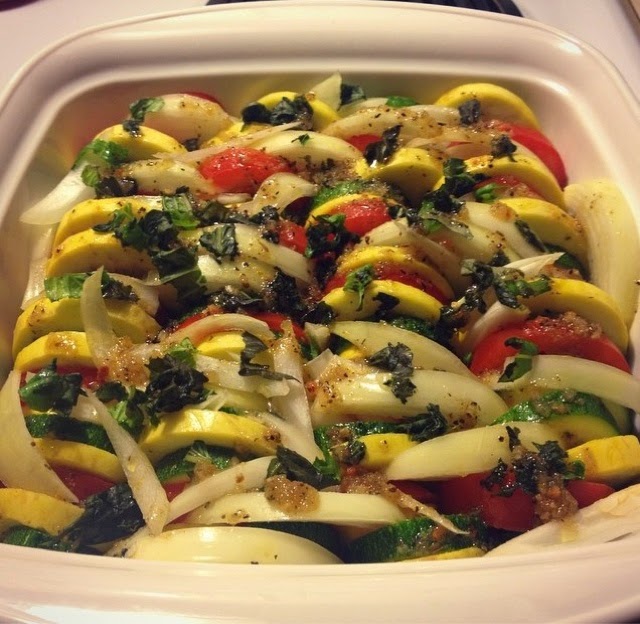 And here's the batch I made this last time. I've been wanting to make a pretty dish like this for awhile, but have been too motivationally challenged to do so. But, I finally took the time to do it and I think it turned out rather lovely!  :)
For this batch, I sliced all veggies as uniformly as possible, 'stacked' on their sides in a baking dish, drizzled with my favorite homemade Italian dressing, then baked at about 350 for about 45 min's to an hour, tossing on some fresh Basil at the end.
Being as it's all kinda tight in there together - though I'm sure you could do them more loosely stacked - they did take longer to soften up than usual. But, I think it was worth it! And it would make a lovely impressive dish to pass.  ;)
And... Oh my gosh... I had plenty left over from the last batch, so I threw some together with some boneless, skinless chicken breast that I had generally seasoned with a 'chicken blend' of seasonings and cooked in some olive oil in a non-nonstick pan and a little bit of Swiss cheese melted over at the end... Match made in heaven! SO good!
Posted by Jess at 5:16 PM No comments:

I've never been much of a conspiracy theorist, but I've got to believe that there is a whole lot of truth to this. 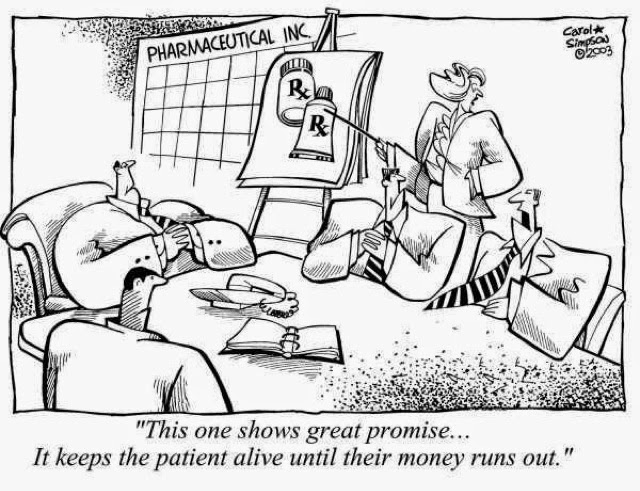 Okay.
I warned you.
This post may be a bit more than you care to know. But, in an effort to encourage others in the benefits of eating healthy...
For the past 20+ years, I have suffered greatly every 25 days or so, thanks to our homegirl, Eve. Debilitating cramping... to the point where I was taking 2 Ibuprofens every 3 hours for 2-3 days straight each month... and then some. (That would be somewhere between 12 and  14 - A DAY - and then a little lesser amount the days before and after.) I would easily go through a bottle of pills every couple months. If I didn't use this much, I couldn't function.
Well... since last Summer or Fall?... I can't BELIEVE the difference! I MIGHT take about 6 or 8 TOTAL now, during one cycle. AMAZING!!
And I have to attribute it to my dietary changes.
I can't tell you how happy I am not to be in so much pain and misery on a regular basis! But, even more than that, I am so glad to know that I am not pumping my body full of all that 'stuff'. I mean, boy I've been grateful to have it... but I know the relief that it offers comes at a greater price. And it's so good to know that I'm not paying as high a price as I had been! Yay!
Amazing how much better your body treats you when you treat it as it was intended!
Posted by Jess at 10:15 PM No comments:

Email ThisBlogThis!Share to TwitterShare to FacebookShare to Pinterest
Labels: The Journey

People still don't seem to fully grasp the whole 'whole food' concept. It's funny. Someone actually asked me "But, I mean you can eat Pringles, right?"
We have been so engrained (forgive the pun) in this culture to not even recognize the difference between whole and processed... healthy and not-so healthy.

I've narrowed it down to three basic overall rules of thumb when trying to eat your healthiest:

1.  If you don't recognize the ingredients... chances are good that your body won't either.

2.  If it has ingredients listed anywhere on it... chances are good that it's not a whole food item.

And that you keep these guidelines in mind next time you go to the market.
... Which actually brings to mind a fourth rule of thumb:

4.  If it's found in an aisle at the grocery store... chances are good that it's not a healthy item.