I found myself with some leftover spinach (from my sauteed version I now like to top my salmon off with) and leftover hamburger this week, so decided to build upon my yummy lunch at Terry O'Chele's and just throw the meat into my spinach and toss it together with a little bit of olive oil and vinegar dressing. 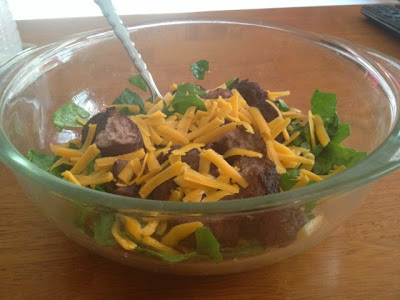 Granted, it looks a bit bland here, but hey, I only have about 30 min's at home for lunch, I only had a few things on hand and I was desperate just to dress up the hamburger a bit... (and use up my spinach before going bad.) But, it had true potential.

So, a few days later, I had some leftover chicken and tried to improve upon it some. 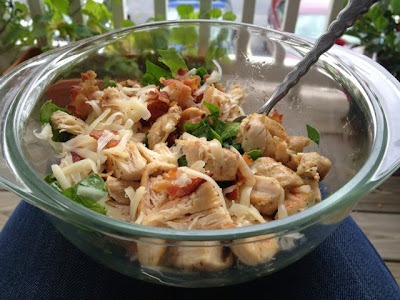 Definitely better. (Changed up the cheese to Swiss and threw some bacon in there, too.) But, still a little lacking. (Inspired as I was, I wasn't inspired enough to go get more stuff at the store to go on it.)

So, this weekend, when I headed to the grocery store, I actually picked up some veggies to further enhance my new concoction. 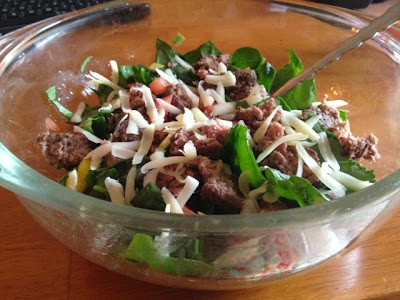 Hard to tell from the picture, but I diced up some fresh tomato, avacado, red onion and banana peppers. And mom has been making a good vinaigrette lately that has honey in it, so I tried that version for my dressing and stuck with the Swiss cheese this time.